ABOUT THE HUICHOL INDIAN ARTISANS

The extreme remoteness of the territory and rugged mountain ranges spared the Huichols from being conquered by the Spaniards and from being substantially changed by the Mexican culture. 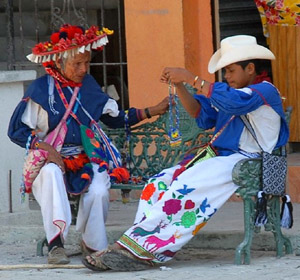 They remain one of the last tribes of people in North America who still live much as they did in pre-Colombian times, maintaining the same ageless rituals and beliefs. They are considered by many anthropologists to be an invaluable window to the past. The Huichol consider themselves “Mirrors of the Gods” and strive to reflect a sacred vision of the world, both physically and spiritually. To the Huichol, everything is alive and has a soul (called Kupuri) and is therefore divine.

These deeply religious people have a belief structure which encompasses every aspect of life and includes worship of multiple deities through offerings and prayers. Tile Huichol use their mode of dress as another important form of religious expression. Their highly ornate and colorful clothing is said to give pleasure to the gods, ensuring their benevolence and protection of the Huichol.

The Huichol are highly creative people who reflect their strong ceremonial traditions and rich mythology in their visionary Huichol art work. These visions are often inspired by their peyote god, whose divine gift enables the Huichol to communicate with all their gods. These mystical experiences can only be told by the tribal shamans, but all tribal members are encouraged to express them through their Huichol art and offerings to the gods.

Through their Huichol art work, whether it be the Huichol beaded art (called Chaquira), Huichol yarn art (called Nearika), or their embroidery, the Huichol encode and document their spiritual beliefs. Anthropologists consider this a significant part of their culture, for the Huichol have never developed a written language. Clearly, the beliefs of the Huichol Indians are very complex and elaborate. They involve myth, shamanism, ritual, peyote, prayer and ceremony. As was true in pre-Colombian times, much of their current Huichol art work continues to depict these religious themes and serve as a means of passing on countless mystical stories.

Anyone fortunate enough to own a piece of Huichol art has more than a beautiful work of Huichol art – they are honored to hold a part of the Huichol art culture, adorned with designs and motifs of individual historical and spiritual significance to the Huichol Indians of the Upper Sierra Madre Mountains. 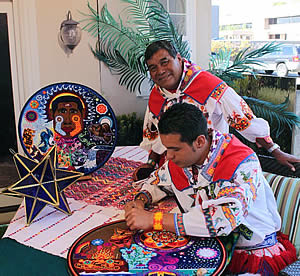